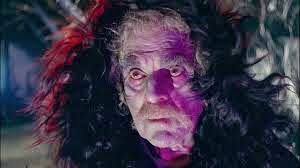 Today is Yellow Razor interviewee and all around cool fellow Scott MacDonald's birthday! He's only 33 but don't hold that against him. If you see him, wish him the best and check out his site: eurocultav.com 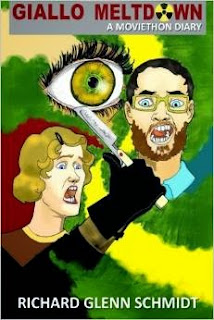 That is Richard's book! Your first clue is his picture, the second clue is his name. Congratulations amateur detective, you're in a giallo! Avoid sexy ladies and psychedelic wall paper. It's for your own good. Or don't. Look I can barely update this blog more than once a month at minimum.

What I can do is sing Richard's praises. He's an author, see and he wrote a book. Go look at your bookshelf. I'll wait. Is Richard's book there? No? Well buy it! That's the only way we are getting out of here alive.

Hey there. I've been writing a few reviews for Scott over at Eurocult AV. I'm not going to link to my reviews specifically because I think you should read them all.
Posted by Brad at 9:14 AM No comments:

Interview With A Scott

You guys know Scott over at EuroCult AV, right? Well if you don't here's your big chance! Scott is a brilliant guy and he runs an awesome website. Don't mention Rob Zombie though. I mentioned him once but I think I got away with it.

1. Tell us something about yourself. Anything.

I'm working with a couple of friends to get a horror film off the ground called Bad Reputation.  I like to describe it as the Before Sunrise of Death, 2 people meet on a bus, arrange a date one of them doesn't survive it. We tried the Indie Go Go route a few years ago, that didn't pan out, so now we're going the Sam Raimi route.
I bought an 8mm camera, lights, and I am making my first short in 8 years, only this time on film.  I've taken my feature script and boiled it down to it's conceptually essentials, and am planning on shooting it sometime in 2015. If anyone wants to help out, we'll probably have another IGG for the short,  you can contact me directly at Scott@eurocultav.com.

2. What is your favorite horror film?

3. Give me 5 other favorite horror films.

In no particular order.
American Werewolf in London
The Wicker Man
Martin
The Thing

4. What other 5 horror films should I see right now?

I would like to recommend something new, but I haven't been impressed by a modern horror film in years, so just looking at my shelves....

Pizza would be first, but I'm in Austin, and there's like 1-2 stellar pizza joints in this city, and they don't deliver to my house, so if anyone in the NYC/NJ area wants to mail me a pizza from my homeland, ask Brad for my address. I will allow him to give it under this circumstance.

10. Name a horror film that you love that most folks don't.

Friday the 13th: The New Beginning

15. 5 Classic Doctor Who serials for horror fans to watch?

To avoid saying shit like Genesis of the Daleks and Caves of Androzani. I'm just going to go from the top of my head....

Impossible, I never declare a -est of anything.

I heard the Babadook was good, but since I haven't seen it yet, the closest I saw to good was Pieces of Talent, and it wasn't great, but entertaining.

18. Best horror film you saw last year? (regardless of the release year)

20. A horror remake that worked for you.
See the great slate of horror remakes we got from the late 70's to the early 90's, everything from Philip Kaufman's Invasion of the Body Snatchers to Scorsese's Cape Fear. If you mean the post-Dawn of the Dead/The Ring remake slate then Friday the 13th, because it wasn't a remake, it was another Jason movie. You basically had multiple groups of teenagers get killed by an undead psycho in a hockey mask.  There is no way a studio will ever remake the original Friday the 13th, Jason sells tickets, Mom doesn't, so basically F13 was a remake in name only.

21. Is there a horror film you'd like to see remade?

No. I used to think if I thought a film was less than good than maybe a remake could make it better. For example, I hated the original Prom Night as a kid, but the Synapse Blu-ray opened that film up to me on a whole other level, and the remake of that was just poor.

I have no guiity pleasures. I will watch most things if they are made with art in mind.

23. If your residence was in danger of sliding into the 5th dimension, what dvds/blurays would you save?

Can we skip ahead 2 weeks and say Grindhouse's The Beyond?

24. What is in your bluray player right now?

My daughter watched Bridge to Terabithia last night, so that.

25. If you could make me watch any five films what would they be?

Mary Poppins, I watch it at least once a year.

27. If you could sit down and watch a film with it's director what would it be?

Emperor - Anthems to the Welkin at Dusk

None, unless you want me to have an asthma attack and DIE!

31. Could you describe the area (room) in which you usually watch films?

32. Name a film you didn't like but upon reevaluation, you did.

Easy Rider, the Criterion Blu made that one shine.

33. Put the Gates Of Hell trilogy in order of personal preference.

The Beyond
House by the Cemetery
Gates of Hell

34. What do you make of The House Of The Devil?

One of the better modern films, great start, lousy finish.

35. What horror film do you think you have recommended the most to people?

Probably something by Fulci or Argento.  It depends who I'm talking to.

Am I picking between children, Brad?

Rollin
The Iron Rose
Requiem for a Vampire
Fascination

Franco
Lorna: The Exorcist
Virgin Among the Living Dead
Girls in the Night Traffic

Rob Zombie has no good films.

39. Name a horror film that you will never, ever watch again.

Anything by Rob Zombie.

40. Upon purchase of a region free bluray player what disc purchases are essential?

Aside from Twitch of the Death Nerve, all Arrow Bava's, Arrow's Withnail and I, Second Sight's Return of the Living Dead (original soundtrack), Second Sight's Re-Animator, the BFI's Herzog collection and Nightbirds, the Italian Blu of Dellamorte Dellamore.

42. Put these in order of personal preference: Argento, Bava and Fulci.

Can't do it, but will say since Argento's filmography is incomplete, and continues to worsen he'd probably be last.

43. The Exorcist or any of the myriad ripoffs?

44. Leave us with another horror film recommendation.


I said earlier that I am not generally impressed by modern horror, and for the most part this is true.  I also have a terrible memory, because I saw the World Premier of Stephen Biro's American Guinea Pig: Bouquet of Guts and Gore at the Housecore Horror Film Festival in 2014, and was extremely impressed by the film.  It was violent, and disturbing in all the right ways, and an excellent continuation of the Guinea Pig series in both the way it handles violence, and stylistically.

Quick Thought On Dawn Of The Dead

I didn't like zombie films. But I don't know that I really had seen many. White Zombie I had seen, taped off of television back in the 80's, and I didn't care for the voodoo type zombies. I liked vampires and monsters. Also I liked slasher films that I saw (cut) on cable.

The box for the VHS tape of Dawn Of The Dead creeped me out. I'd see it in the video store and steer clear. You remember the one. Roger, recently undead, is sitting up in a three picture panel. Yeesh.

All of this changed one very late night in the late 90's at Matthew's house. Upstairs, in between his and his sister's room is an open air television room. Matthew threw in a VHS of Dawn (much to my (more than likely) silent) chagrin. How wrong was I? You know how wrong I was. I've forgotten plenty since but I haven't forgotten that night. This is the ultimate zombie film and only a few can really even challenge that title. It just goes to show that you can't judge a book by it's cover and you should occasionally go outside of your perceived comfort zone. I try to remember this when Richard is putting over musicals.
Posted by Brad at 1:51 PM 4 comments:

The Year Of The Fulch

Hello? Good grief, I hope you haven't been here the whole time. Yeah so, hey. Sorry it's been so long. I did miss you. If that helps. Richard and I are recording tonight and we are plotting the triumphant return of Hello! This Is The Doomed Show! Plus if I can get myself in gear I'll post here a bit more often. Brad, you didn't even tell folks Merry Christmas. Sorry y'all. Happy New Year!


We're planning on contributing to the worldwide phenomena that's occurring worldwide called The Year Of The Fulch! So hopefully we'll finish up our Fulci series. And Troy Howarth is releasing his Fulci book that we are all VERY excited about. And we're giving away a baby elephant. Stay tuned.
Posted by Brad at 1:56 PM 2 comments:

Email ThisBlogThis!Share to TwitterShare to FacebookShare to Pinterest
Labels: Hello! This Is The Doomed Show, Richard 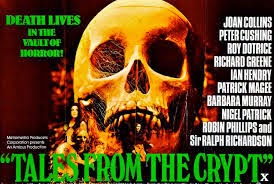 Well, the Christmas season is upon us and with Scream Factory's release of Tales From The Crypt (containing one of my favorite holiday segments: All Through The House) and The Vault Of Horror on bluray got me to thinking: What are your favorite horror anthology films? While certainly not exclusively made by British horror film company Amicus, they made a lot of great films to pair up with Creepshow and the like. I'm going to say my favorite is Tales From The Crypt followed closely by From Beyond The Grave. What can I say, I'm an Anglophile. What say you?